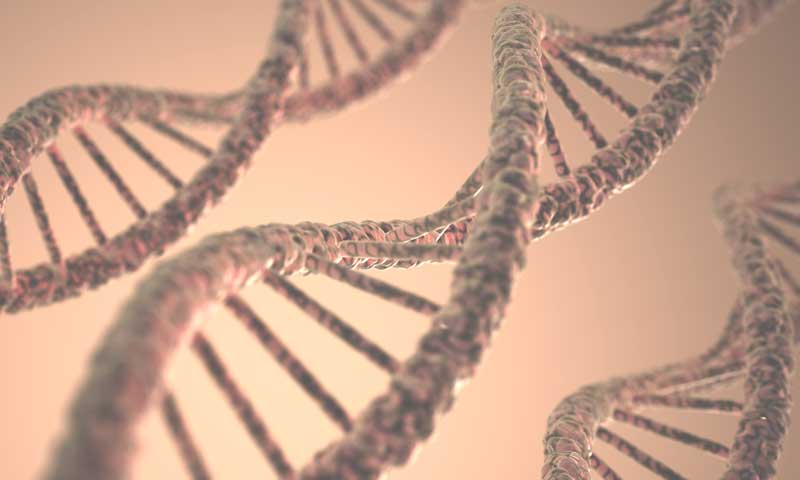 Genes come in matched pairs and a puppy inherits half of their set from their mother and the other half from their father, creating their own unique set of matched pairs.

Sometimes a mutation can occur that alters one of the genes carried by a parent and this gene becomes defective. The defect can then be passed on just like a healthy gene. This can lead to a genetic illness.

There are many ways that defective genes can be inherited and it must be remembered that genetics is new and scientists are only at the beginning of their journey to understand how inheritance works.

The following is a very simple introduction to some of the basic forms of inheritance.

In Autosomal Dominant inheritance, an illness can be caused by a single bad gene coming from mother or father. Some genetic conditions cause illness right away, so it is unlikely that an affected dog would ever be used to breed. Others however show no evidence until later on in life, so it is possible to assume that a dog is healthy and breed from it.

Autosomal dominant illnesses can be easier to identify and eliminate from the breeding population because in their simplest forms, if a dog has the gene it has the illness and you will know it sooner or later. This is different from autosomal recessive illnesses where some dogs can be carriers and never show any outward signs that they have the illness. 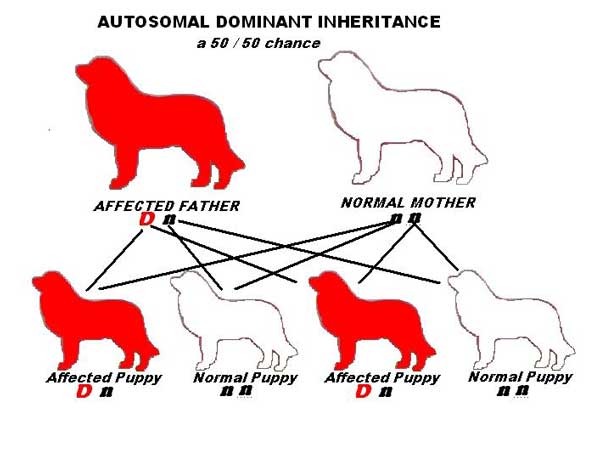 As with all genetic inheritance, a puppy will receive half of their genes from their dam and the other half from their sire, giving them their own unique collection of paired genes. In the case of recessive illnesses, a puppy must receive a faulty gene from both its mother and its father before it will get the illness.

This is thought to be because in recessive inheritance, although a puppy may have one bad copy from one parent (making that puppy a “carrier” of the fault), it will still have a good copy of the healthy gene from the other side and this is enough to over-ride the defective copy. In order to succumb to the illness both copies must be defective. It is for this reason that bad genes can lurk for generations within healthy appearing carriers and will only have a chance of coming to light when a carrier and a carrier are mated together. 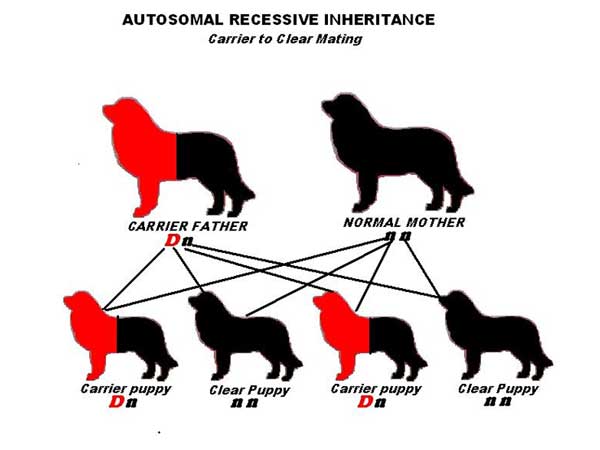 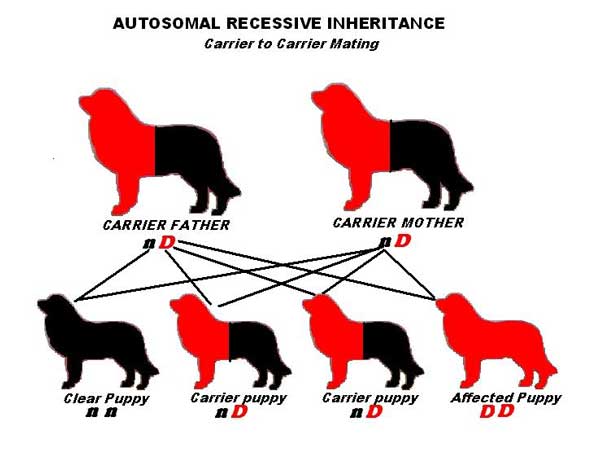 Generally speaking, all creatures have a set of genes carefully paired up, with half coming from their mother and the other half coming from their father, creating their own unique set of pairs. It does not matter if the offspring are themselves male or female, genetically they will have the same pattern of paired genes – but with one exception. This exception occurs in the so-called sex chromosomes, which differ from male to female. Females carry two copies of the X chromosome, and males carry one X and one Y. This simple distinction triggers all other characteristics that determine how males and females differ.

Sometimes the X chromosome itself can alter due to a random mutation and this can lead to it becoming damaged. This damage can then cause genetic illness. The way this is passed on differs from other forms of genetic diseases. If a father carries a damaged X chromosome, he passes this on to some of his offspring just as he does with all his other genes. If the resulting puppy is female and she received a normal healthy copy of the X chromosome from her mother, along with the faulty one from her father, then the good copy will over-ride the bad copy and all will be well. She will not show the illness and live a healthy life. But, she will still carry the defect and risks passing it on in turn to her own puppies. If a carrier female passes a damaged X chromosome to a male puppy, he has no second healthy copy of the X to over-ride the information from the faulty copy, all he has is a single much shorter Y chromosome to pair it with, and this cannot “fix” the damage to the X. He will therefore become affected with the illness.

So, the pattern of inheritance goes from unaffected carrier females to affected males, who can then sire unaffected carrier females in turn and so on. An example of this is haemophilia which affects males and is passed on by females. X-linked inheritance can have dominant and recessive characteristics and to understand the differences have a look at this more detailed explanation: http://ghr.nlm.nih.gov/handbook 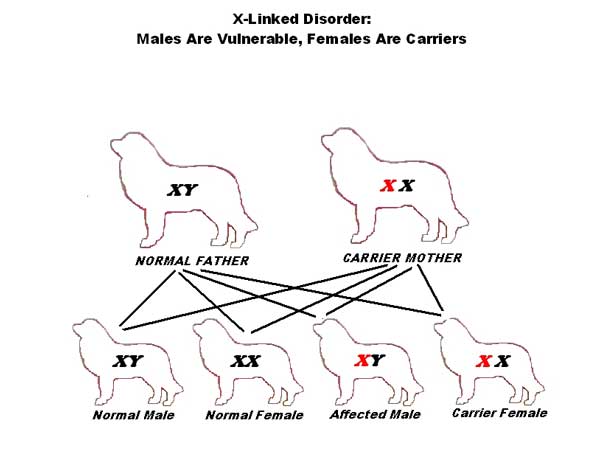 In each cell of the body there is a nucleus which holds the main collection of DNA, half coming from each parent, to form a set unique to the individual. This DNA provides the blue-print for the entire body and it is here where every detail of an individual arises. Within each cell there is another structure called the mitochondria, which is like a very tiny energy source that creates power for the cell to live and function. Inside mitochondria there is a second primitive bundle of DNA that is totally separate from what is found within the nucleus. Unlike the nucleus, the mitochondrial DNA has only one purpose and that has to do with powering the cell. It does not influence hair colour, eye colour, sex or anything else. All of that is directed from the DNA at the heart of the cell within the nucleus.

Another unique aspect of mitochondrial DNA is that it does NOT come from both parents; it only ever comes from the mother. Without exception. This means that both the sons and the daughters of a female carry an identical set of mitochondrial DNA, and this is passed down through generations as an unbroken chain from mothers to their offspring. Unbroken that is unless the DNA within the mitochondria itself undergoes a random mutation and becomes altered or damaged, which does very occasionally happen. When it does become altered this can lead to illness. Also, the alteration- the damaged piece of mitochondrial DNA – replicates in every generation that follows, passing along the illness to successive generations. Therefore, mitochondrial inheritance always follows the female line and always has the potential to affect offspring of both sexes. Only the daughters can pass it on however. 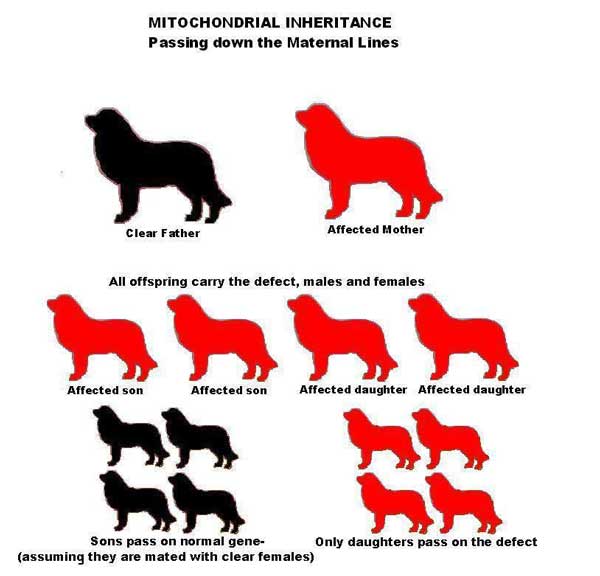 The term “Polygenic” simply means ‘many genes’ and refers to inherited conditions that are governed by multiple genes rather than by the simple pairings of dominant, recessive or x-linked genes. An example of a polygenic condition that occasionally affects our breed is hip dysplasia. There are believed to be a number of genes at work that influence the structure and development of the ball and socket joints and puppies will have a chance to inherit sets of these genes in different combinations from each parent. This is why it is possible to have a puppy with a high hip score whose parents both had very low hip scores. It could be that the dam had some of the “bad genes”, but not enough to cause the problem and that the sire had the same, only he carried the other half of the “bad genes”. Put these two together and some puppies in the litter have a chance to get both sets of bad genes, half from mother and half from father, resulting in hip dysplasia.

The following illustration shows how this works. Sire and dam each carry 2 of the 4 gene mutations that lead to a theoretical polygenic illness. Because each only has two and the rest of their genes are healthy, they never become ill and seem perfectly fit themselves. They have a litter of four puppies. One inherits a single mutation. The second gets two of the four and a third gets a set of genes with no mutations at all. It is possible that none of these three puppies will show any signs of illness themselves, and number three will never be at risk of passing on any of the faulty genes. The fourth puppy however, is unlucky and inherits all four bad genes, two from mom, and two from dad. This puppy therefore has the full set of four defective genes and will become ill with this polygenic disease.