The background of the Leonberger is a very clouded one.. Many things have been written, sometimes accounts contradict each other, and little proof has been given for many of the stories, but the Essig Legend below is one of the foremost of the possible early developments of the Breed we know today. The Leonberger is a German breed which explains why Germany is the only country allowed to change the FCI Breed Standard. 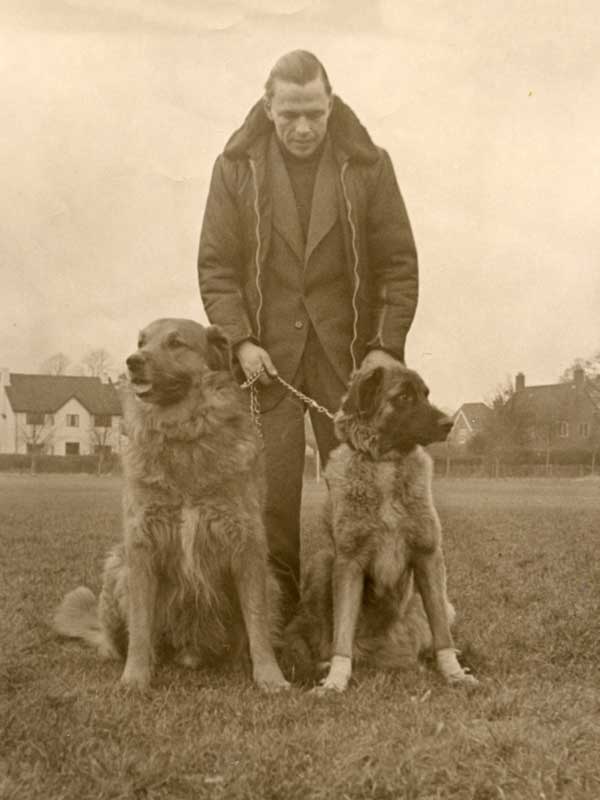 This account was written of Essig’s creation of the Leonberger : “Amongst his dogs there was a black and white Newfoundland female (Landseer type). He crossed her with a longhaired Barry-dog (St. Bernard) he owned also. He crossed them for 4 generations, out crossed again with a Pyrenean Wolfhound (Pyrenean Mountain Dog) crossed again with a St. Bernard”. There is, however, no proof that this is in fact what was done and that there were no other dogs involved. Essig started breeding in 1846, the date now attributed to be the birth of the Leonberger.

Today we know that there must be more dogs involved than the ones with which Essig claims he started the breed. Modern genetics tells us that is impossible to create the Leonberger from the 3 breeds as described. At the height of his career he was selling up to 300 puppies a year. Essig was helped a lot by his niece Marie, who practically did all the kennel work. Later a relative, perhaps the nephew Essig mentioned once, took over the kennel. Essig died in 1889.

Albert Kull wrote the first standard in 1895 so we can say that the breeding started in 1895. Then came the First World War. The Leonberger would have disappeared were it not for the efforts of a few lovers of the breed – the Leonberger population was decimated. A very small number of people had succeeded in keeping their dogs alive, among them Albert Kienzle. In The height of the dogs was brought down to at least 76 cm. for males and to 70 cm. for females. (It previously has been at least 80 cm for males and 70 cm. for females). In the 1960s the standard was again revised and the heights were now changed to 72 cm. minimum, and 80 cm. maximum for males and 65 cm. minimum with 75 cm. maximum for females. One reason Leos in France are so much bigger is because they did not recognise this reduction in size for many years.

In the UK, Leonbergers came back firstly with Dave Gower who bought one for 10 bars of soap at the end of WW2. He also brought over a 2nd one and had a litter, but the line did not continue. However today’s Leos stem from those entering the country in the 70’s & 80’s.

The first modern day Leonberger, Catja v. Tannenhain was imported in 1975 and the first litter was born in 1981 from Xilja v. Chrumelbach of Glanzberg & Chatkantarra Adkin of Rossnick. Celia Peters, Fiona Karolus and Sonja Gorbould were the three people who re-introduced the breed and who deserve the credit for perseverance and dedication which has resulted in the Breed’s strength in the UK today. It is so much easier to import new bloodlines now with the advent of PETS, and many people have now added to the genetic diversity of the Breed.